Most of us have been there, crawling along in traffic on the way to or from work, thinking about how we would rather be spending that time.

But it only seems as though you spend half your life stuck there.

Still, that’s the good news, based on a report by Texas A&M Transportation Institute and INRIX Traffic, answering the question of how much time you spend in traffic.

A typical commuter in a “very large urban area” such as New York, Los Angeles, Chicago, Houston, Dallas or Atlanta is delayed by traffic an average of more than 10 eight-hour workdays a year, according to the 2019 Urban Mobility Report which used data from 2017.

The greatest total of commuting delays among 15 very large urban areas was 119 hours for drivers in Los Angeles-Long Beach-Anaheim, CA – almost 15 eight-hour workdays, or three work weeks, a year – with the shortest delays, 61 hours, experienced in Detroit, MI, the report said. A very large urban area was described as having a population over 3 million people.

“You can feel your life slipping away, like sand in an hourglass, when you’re sitting in traffic that long,” said one commuter from Encino who drives to and from work in West L.A. “It’s almost too painful to think about … what I could do with that much time – three weeks!”

Some other very large urban areas and their average annual delay times are:

It’s probably no surprise that the lowest average delay times occurred in small urban areas with less than 500,000 population, although delays still averaged 37 hours a year.

The national average of 54 hours in delays per year has nearly tripled from the 20 hours in 1982.

Following are details from the report on other sizes of urban areas:

So, is there hope that you can get out of congested traffic any time soon – especially in very large cities? Probably not, although experts may keep trying.

“Congestion is a persistently growing problem,” said the report. “The problem is larger than ever … [And] anyone who tells you there is a single solution that can solve congestion, be supported and implemented everywhere – or even in most locations – is exaggerating the effect of their idea.”

But that hasn’t stopped companies from trying to find the big solution.

Next: How Ford Motor Company and Volkswagen Group are exploring the use of superfast quantum computing to reduce the amount of time you spend in traffic. 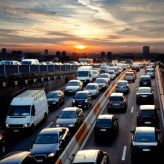 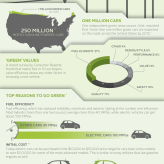 When “green” vehicles hit the road, everyone seems to notice. More and more – total vehicle numbers and models – are doing just that. About one in 250 vehicles now on the road are so-called green vehicles – green cars,…