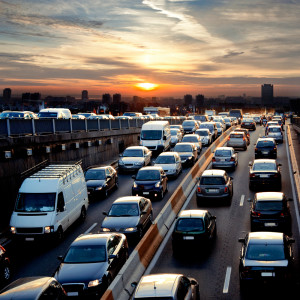 Streets and highways seem more crowded than ever?

It’s not your imagination.

Almost 253 million light vehicles are operating in the United States, reports IHS Automotive research firm. That’s the “highest in [IHS] recorded history,” according to Richard Read at The Car Connection.

And that’s light vehicles only; the figure doesn’t include buses, large trucks and commercial vehicles.

The number of light vehicles pushed past that quarter-billion mark with an increase of 3.7 million, or 1.5 percent, in the last year, while the average age hit a plateau at 11.4 years, the same as last year. Still, that average age is expected to rise to 11.7 years by 2019, because of improved car quality, and as  Americans spend cautiously after The Great Recession, Read reported at the auto research website.

“Cars are built better than they once were,” wrote Read, citing IHS Automotive. “Increased regulation of the industry – and you could argue, the growing number of vehicle recalls – means that our cars are designed and managed to endure. … [So] the old model of trading in a car after four years is going the way of the dodo, if it’s not gone already. We’re making do with what we’ve got for longer.”

“The average age is in line with the trend shift first seen in 2013, in which the combined fleet of cars and light trucks on the road is older than ever,” said IHS in its report. “New analysis, however, indicates the average age of light trucks has increased in the past year to the same age as passenger cars, both at 11.4 years. This marks the first time this has happened since 1995, when the data was first reported.”

Based on the growth of new vehicle registrations in the past few years as the U.S. auto industry has rebounded, IHS Automotive forecasts that the volume of vehicles 0-5 years old will increase by 32 percent over the next five years while vehicles in the 6-11 year old category will decline by 21 percent. Because of improved quality and consumers holding their cars and light trucks longer, vehicles 12-plus years old continue to grow and will increase by 15 percent by 2019.

IHS Automotive works with customers in all areas of the automotive aftermarket to help them identify opportunities and specific planning efforts that may help improve their businesses.

The IHS study was a snapshot taken Jan. 1, but the results were just released.

Generation Z. Although the oldest members are barely driving age at 17, they are the next generation of car shoppers. And what a generation they may be. New research from Autotrader and Kelley Blue Book, took an in-depth look at…

Drivers of convertibles are young and carefree, right? Wrong. At least that’s what findings of a study by Experian Automotive showed. Owners of convertibles apparently are older, more educated and more affluent than the typical American new-car buyers, running counter…