It has been nearly a quarter century since the last new Ford Bronco hit the road – or the off-road.

But that’s changing after years of planning with Ford Motor Co.’s re-introduction of the iconic vehicle that was discontinued with the 1996 model year.

While fans of the model still can purchase a pre-owned version – such as a 1996 Bronco XLT available for about $27,000 on Autotrader recently or an azure blue 1969 model selling for about $109,000 – Ford’s focus is on selling the new model, albeit with a retro look. 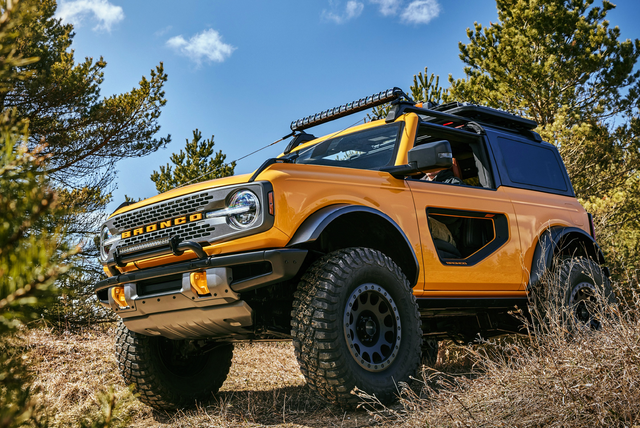 Photo credit: Ford via Newspress USA
The new Ford Bronco aims to take on the wild – and other SUVs.

Ford sold more than 1.1 million Broncos in five generations over 31 years, but retired the model with the introduction of the more “family-friendly” Ford Expedition and Ford Explorer.

But now Ford needs something to take on vehicles such as Fiat Chrysler Automobiles’ very popular Jeep® Wrangler, the Toyota 4Runner and the Land Rover Defender.

The new sport utility will be available in two sizes: The Bronco Sport to be released this year with a price tag starting around $28,000, and larger Bronco in two- and four-door models arriving next spring with prices starting at about $30,000 and rising to more than double that depending on options.

Customer response to the reveal of the all-new Bronco is “unprecedented in Ford history,” with more than 165,000 people placing $100 deposits for orders online within the first three weeks.

“Bronco Sport has the toughness and smarts to help turn off-road novices into 4×4 pros,” said Hau Thai-Tang, Ford’s chief product development executive. “Bronco Sport embraces the needs of outdoor enthusiasts – every inch of it was designed and engineered with weekend adventures in mind.”

“We created the Bronco family to elevate every aspect of off-road adventure and equipped them with class-leading chassis hardware and exclusive technologies to raise the bar in the rugged 4×4 segment and take people further into the wild,” said Jim Farley, Ford’s chief operating officer. “They’re built with the toughness of an F-Series truck and performance spirit of Mustang.”

Ford already has doubled-down on re-introduction of the model with five Bronco Adventure Concepts.

“Our dream for Bronco was not just to design a family of vehicles people would love, but to build a community around people who love to go off-road and get into the wild, who want to customize and personalize their Broncos, and share experiences with each other,” said Jim Hackett, president and CEO.

You’ve navigated to a great place. The Santander Consumer USA blog is a rich source of information for the worlds of automobiles and auto finance, and keeps readers coming back for more. There’s another that’s worth a visit, too, and…

Americans think texting or reading texts while driving is as dangerous as driving drunk, but that doesn’t stop them from doing it, according to a recent online survey by Harris Interactive. The survey shows that 94 percent of the 2,045…

Taking a photo of yourself, a “selfie,” while driving is crazy, right? The problem is many young drivers especially are taking selfies even though they know it’s dangerous. OK, so this “driving selfies” thing isn’t new, but it still is…