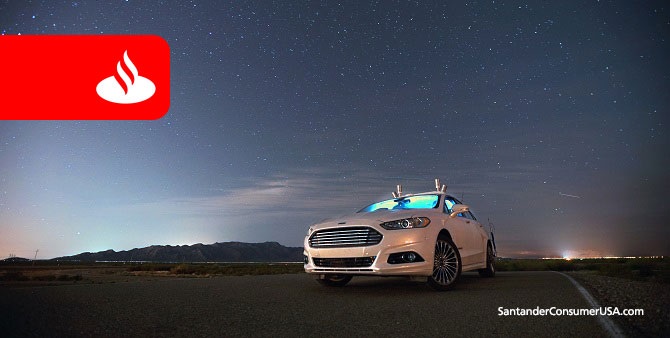 Most of us aren’t ready for autonomous, or self-driving, vehicles yet.

At least that’s what a AAA vehicle technology survey reported about a month ago.

But now there’s news that Ford already has tested a Fusion Hybrid research vehicle that can travel along a winding road at night – in complete darkness – without the use of headlights.

“No lights? No problem!” according to a headline in a company press release announcing the success of recent test – “Project Nightonomy” – at its Arizona proving ground. “Ford Fusion autonomous research vehicles use LiDAR [laser] sensor technology to see in the dark.”

“Demonstrating the capability to perform beyond the limits of human drivers … the company’s use of LiDAR technology and 3-D maps work in conjunction to allow vehicles to drive without headlights on.”

“Thanks to LiDAR, the test cars aren’t reliant on the sun shining, nor cameras detecting painted white lines on the asphalt,” said Ford’s Jim McBride, technical leader for autonomous vehicles. “In fact, LiDAR allows autonomous cars to drive just as well in the dark as they do in the light of day.”

To navigate in the dark, Ford self-driving cars use high-resolution 3-D maps – complete with information about the road, road markings, geography, topography and landmarks like signs, buildings and trees, Ford said. The vehicle uses LiDAR pulses to pinpoint itself on the map in real time. Additional data from radar gets fused with that of LiDAR to complete the full-sensing capability of the autonomous vehicle.

For the desert test, Ford engineers wore night-vision goggles to monitor the Fusion from inside and outside the vehicle. The night vision “allowed them to see the LiDAR doing its job in the form of a grid of infrared laser beams projected around the vehicle as it drove past.”

“Inside the car, I could feel it moving, but when I looked out the window, I only saw darkness,” said Wayne Williams, a Ford research scientist and engineer. “As I rode in the back seat, I was following the car’s progression in real time using computer monitoring.”

“Sure enough, it stayed precisely on track along those winding roads,” Williams said.

So, is the technology ready for the real world? The short answer is “no.” But that doesn’t make it any less amazing. See for yourself in the following video.

The Fourth of July is the heart of summer for most of us. If outside temperatures are not hot already, they’re getting there fast for a broad swath of the country. And that means car care tips and more for…

Toledo, Ohio – The one-millionth Jeep Wrangler JK model, a Rubicon, descendant of one of the most iconic vehicles in the world, rolled off the assembly line Friday at Chrysler Group’s Toledo (Ohio) Assembly Complex. Chrysler executives, plant employees, UAW…