True exchange at a stoplight in a major U.S. city.

“You know you really should stop looking at your phone in the car,” said a teenager to his mother. Then, after she protested, he said, “I’ll hold your phone.”

You know distracted driving has reached alarming levels when kids are doing the parenting – and seem more knowledgeable about the problem than the adults in their lives.

While automotive safety features have come a long way toward mitigating some of the risk of accidents, responsibility for safe driving still resides with, well, the driver. That is underscored by a recent large-scale study conducted by Zendrive, an automotive analytics company. 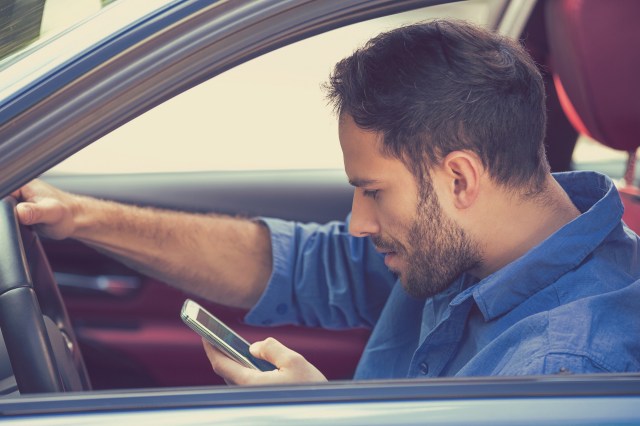 “How bad? One hundred times worse than the most reliable data available.”

The snapshot reveals that “69 million drivers use their phones behind the wheel every day, far higher than the 660,000 daily distracted drivers reported by government data” reported by the National Highway Traffic Safety Administration, according to Zendrive.

Here are several key findings from the Zendrive study, which involved monitoring 4.5 million drivers who traveled 7.1 billion miles from last December to February:

“It’s not your imagination,” reports The Detroit Bureau, an online automotive news provider. “In spite of concerted efforts by federal agencies and safety advocacy groups, Americans are spending more time than ever using their phones while behind the wheel.”

“We did a similar analysis last year and … observed that the percentage of trips with distraction across the nation was 31 percent,” said Katherine Wellman of Cambridge Mobile. “It’s certainly increasing rather than decreasing – and that’s disconcerting.”

“As the number of distractions behind the wheel increases – from the latest phone apps to in-vehicle technology – it is important that we better educate drivers on the dangers of distraction,” said Jake Nelson, AAA director of traffic safety advocacy and research.

“There is a disconnect between what drivers do and what they believe. While most recognize the dangers created by taking your eyes off the road, they engage in distracting behaviors anyway.”

You can read the complete Zendrive report, 2018 Distracted Driving Snapshot | What we learned from driving 100 billion miles, on the company’s website.

The 100 billion miles is a reference to the total amount of data that has been collected by Zendrive.

They would be safer miles if we all put down our cellphones.

Road trips are as much a part of summer as ice cream cones and miniature golf – and in some places visiting the boardwalk or boating at the lake. But planning ahead for your road trip can make a big…

Automobile travel will retain its traditional spot at the top of transportation modes Americans use for the Memorial Day weekend period, May 23-27, according to a survey by the American Automobile Association (AAA). “Approximately 31.2 million people plan to drive…