Maybe it should come as no surprise.

Women shoppers would rather deal with women sales people at the dealership, reports a new car-buying guide from JoinWomenDrivers.com.

However, while women represent nearly half of car buyers and influence most purchases, only about 8 percent of front-line dealership positions are held by women, according to the report, co-authored by Anne Fleming, president and car buying advocate at JoinWomenDrivers.com. 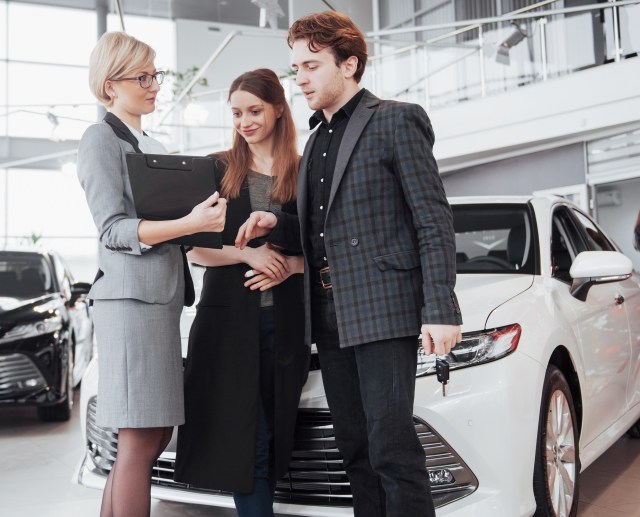 “Almost universally, women rated their satisfaction scores higher when dealing with female sales advisers,” said the JoinWomenDrivers.com report, which was drawn from a national survey based on 3,013 car dealer reviews at the website. “Ultimately, the results gathered by [the survey] illustrate the need for significant culture shifts to address consumer experience concerns.”

The car-buying guide suggested dealerships should hire and place more women on their sales teams and train male employees in the behaviors and outcomes most desired by women shoppers.

If perception, indeed, is the shopper’s version of reality, then the gender gap is significant.

Women who responded to the survey reported that they felt a lot more relaxed and a little more confident when dealing with a female sales adviser. They also indicated they were less apprehensive and felt less “overwhelmed” with a saleswoman.

“It’s natural for buyers to be apprehensive and nervous about buying a car, as it is a top buying decision in any person’s life,” said the guide. “The adviser can make a big difference.”

“Women consultants were rated higher in each part of creating a successful relationship – trustworthiness, being respectful, likable and understanding,” according to the JoinWomenDrivers.com report. “Price is very important, but women rate that lower, because they believe they can buy the same car elsewhere for within a relatively narrow price margin.”

The ability of a sales adviser to listen and not apply sales pressure also are valued by women shoppers.

“If a woman feels the consultant isn’t listening, she will simply find someone who will,” said the report. And “an approach that is perceived as high-pressure will send most consumers off to another dealership before the deal is done. … A successful sales consultant with a high EQ [Emotional Quotient] understands their job is to assist and guide the shopper, not convince.”

And, yet, one of the simplest behaviors turns out to be one of the biggest issues, with more than four in 10 survey respondents expressing dissatisfaction with the way they were greeted in the first place.

But it was the one area where women were “slightly more satisfied” with male sales advisers.

Sometimes, the best way to tell if a vehicle is safe is to crash it. Not you, of course, but the Insurance Institute for Highway Safety (IIHS), which is where to find the safest new and used vehicles based on…

Should I take cash back or lower financing on my new car? In this age of incentives, it’s a good question, but not one with a simple answer. A lot of variables go into deciding but, fortunately, online calculators are…

Four of the most reliable cars on American roads are either recent model Toyotas or Hondas, with a Ford thrown in to spice up a list of the Top 5. That’s according to a “massive study” conducted by automobile repair…