SUVs are big on safety, and small SUVs apparently are the biggest of all.

Nine of the 21 selected are small vehicles, while five are midsize and seven are luxury size SUVs.

A total of 17 manufacturers were represented in the final IIHS crash-test rankings with four manufacturers – Honda, Nissan, Acura (a Honda brand) and Volvo – capturing two awards each.

The flip side of the SUVs were the pickup results, with the IIHS recognizing just one, the Ford F-150.

The Top Safety Pick awards, which started in 2006, are intended to help consumers identify the top safety performers “without having to sort through a lot of individual test results.” The IIHS works in conjunction with the Highway Loss Data Institute, a nonprofit research organization that publishes insurance loss statistics on most car, SUV and truck models on U.S. roads.

Chances are you’ve heard of Kelley Blue Book. And maybe even a few other used-car research websites such as Autotrader.com, Cars.com, TrueCar.com, eBay, Yahoo Autos and Edmunds.com. But even more resources exist – we found 16 websites that comprise mainly… 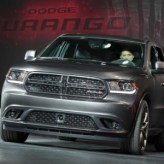 Americans paid slightly less in December on average for new light vehicles – cars, pickup trucks, crossovers – than they did a year earlier. How much average new-car prices were down in 2013 depends upon who you believe: – The…