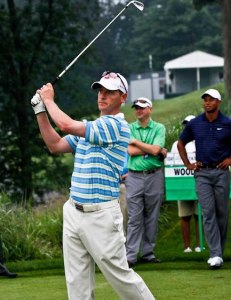 That’s the only way to describe the AT&T Pebble Beach National Pro-Am.

From the first hole to the stunning 8th on Arrowhead Point to the 18th with its “crashing waves against the Pacific-soaked seawall,” Pebble Beach itself provides memorable vistas – and golf.

And then there’s legendary Spyglass Hill and the Monterey Peninsula Country Club courses, as well.

Started in 1937 by entertainer Bing Crosby, the golf tournament this year features 156 professionals and 156 accomplished amateurs – including celebrities – in four rounds over the three legendary courses.

Among the amateur players will be Tom Dundon of Dallas, board chairman and CEO of Santander Consumer USA. Dundon, who has participated in the tournament since 2006, finished 16th last year with partner Hunter Mahan – the same team that finished 10th in the 2011 tournament.

Santander Consumer USA also is among the corporate sponsors of the tournament, having contributed more than $3 million over the 10 years of the company’s participation.

Winners will be the top pro, top pro-am team and, of course, the charity the tournament supports.

The classic has provided more than $120 million since its inception – including $10 million last year – and now partners with the Monterey Peninsula Foundation. The foundation awards grants to nonprofit organizations that focus on arts and culture, community and environment, education, health and human services and youth in communities of central and northern California.

California also was one of Santander Consumer USA’s top auto-lending markets in 2014.

Complete listings of pros and celebrities are available at the tournament’s official website.

Besides the pro-am, Pebble Beach will host the five-hole Chevron Shoot-Out between players from the San Francisco Giants and 49ers and the five-hole 3M Celebrity Challenge.

Santander Consumer USA (SC) has been named as a finalist in D CEO’s 2021 Nonprofit and Corporate Citizenship Awards, held in partnership with Communities Foundation of Texas. SC was recognized in the category of Collaboration of the Year for the…

Most of us have a lot of reasons to be thankful, not the least of which is a day set aside for thankfulness. The meaning of Thanksgiving is not lost on Santander Consumer USA, which is thankful for the millions…