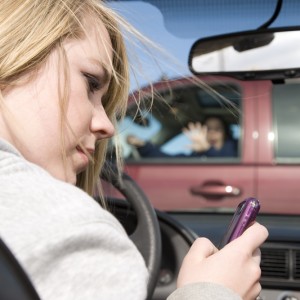 If you want to draw the ire of your fellow motorists during the summer driving season – anytime, really – texting while you’re driving will do it.

That’s the No. 1 finding of a survey commissioned by Expedia online travel site.

On the whole, distraction is the most infuriating feature of the American driver, according to the survey. And it’s people texting while driving that incur a lot of anger from their fellow motorists, with 69 percent of Americans rating “The Texter” as the most aggravating type.

Still, despite the fact that motorists identify texting as the most offensive driving behavior, 55 percent admit to using their mobile phone at least some of the time while driving. Go figure.

Other drivers whose behavior could contribute to a raging reaction on the road:

The Drifter (43 percent) – drivers who straddle lanes or weave between them.

The Crawler (39 percent) – a motorist who drives well below the speed limit.

The Swerver (38 percent) – a driver who fails to signal before changing lanes or turning.

Other motorists that get the attention of their fellow drivers – and not in a good way – are “The Left-Lane Hog” at 32 percent, “The Inconsiderate” who don’t let other drivers merge (30 percent), “The Speeder” (27 percent), “The Honker” who leans on the horn (18 percent), “The Unappreciative” (13 percent) and “The Red Light Racer” who continually inches forward at a traffic signal (12 percent).

Nearly seven in 10 Americans (69 percent) report having been “flipped off” by a fellow motorist, while only 17 percent have admitted to giving the one-finger salute themselves.

The survey, which elicited responses from 1,001 adult Americans to identify the behaviors most likely to ignite road rage, dealt specifically with the heavy Memorial Day travel weekend.

But the results can be applied just as easily to the busy summer driving season in general – including July 4 and Labor Day – or driving any time of the year on crowded roads, including workday, rush-hour commuting. (There are plenty of commuters who could speak to the last point.)

“Expedia rents millions of cars to Americans, so we set out to learn what behaviors on the open road are most welcome, and what behaviors are most aggravating,” said John Morrey, vice president and general manager of Expedia.com following release of the survey results. “The rule, as with airplanes and hotels, is that shared spaces demand decorum and attentiveness.”